Photos
Recipes and Benefits of Emu Oil
Where to Buy

(WARNING! Photos at the bottom of the page are graphic.)

Our home is located in a rural area in Montezuma County, Colorado. We live on a small 5 acre “farm” with 6 horses, poultry, dogs, cats, domestic birds, and of course the local wildlife. There is a canyon directly north of our home, which is home to deer, elk, bears, and occasionally mountain lions.

On the night of October 11, 2010, at about midnight, I heard my horses galloping into the pasture. They sounded frantic and several of them were snorting loudly. We had seen a mountain lion as close as our driveway just 3 nights prior. I rushed outside into the chilly night air with a flashlight, and my daughter and I looked around the barnyard. We saw the horses were in a tight group at the far end of the pasture. They all appeared to be fine although frightened. I was certain the mountain lion had spooked them causing the flight into the field. At the time, I didn’t see any injuries to any of the animals. We continued to look around to be sure the lion had departed. Feeling that everything was alright, we headed back to bed.

Early the next morning, I looked out my bedroom window and observed my big black horse, Ranger, standing alone in the lower portion of the pasture. The other horses were quietly grazing, but Ranger held himself strangely still. Though he was a bit of a distance from the house, I thought the right side of his shoulder didn’t look quite right. I hurriedly dressed, fetched a halter and lead, and dashed into the field. As ; approached, ; could see the horrific extent of the injury Ranger had sustained on the right shoulder and chest. The skin was hanging down in a large flap with a significant piece of muscle attached to it. Through tears, I went to Ranger’s side and began to speak to him and gently touch his neck. He stood quietly while I looked closely at the wound. It was so deep I could see the individual muscles inside that went down into his leg. I could have placed my hand into the wound all the way up to my wrist it was so deep. I was sure the injury had been inflicted by a mountain lion attack. In addition to the deep chest wound, there were 4 superficial claw marks high on the left flank.
The veterinarian arrived, and I returned to the field with him. Ranger was still standing in the same place. Even the vet was shocked at the extent of the wound. Upon examination, the vet explained that though a lion was undoubtedly involved, the damage was blunt force trauma caused by Ranger galloping into a large, square fence post that was in concrete. The doctor indicated that the edges of the wound were straight rather than torn, which suggested a collision with an immovable object rather than injury from teeth or claws.

I placed the halter on Ranger and gently encouraged him to move so we could get him up to the barn to take care of him. The vet said that if he was unable to move his leg enough to get to the barn that I might need to consider euthanasia. After a few tugs on the halter, Ranger reared on his hind legs. He came back down on both front legs and took a few steps. Though in obvious pain, Ranger walked slowly up to the barn with me. The vet offered some reassurance that we could get Ranger through this.

Once at the barn, the vet gave him heavy-duty tranquilizers, lidocaine, and began to clean the wound. He scrubbed the area with a soft nylon brush and rinsed with a cold hose. He felt it was worth a try to attempt to suture the area back together. He did explain that it would only be a slim possibility that the damaged skin and muscle could be saved, but he wanted to try. After treatment, Ranger was placed in a stall to keep his movements to a minimum. Antibiotics were prescribed.

Over the course of the next week or so, the sutured tissue began to deteriorate. I was instructed to wash the wound with cold water, and remove any dead tissue that I could. After several days of this, I summoned the vet again. A partner in the veterinary office came out, again tranquilized Ranger, and sharply debrided all the necrotic tissue away. The odor was terrible, but once the dead flesh was all removed, true healing could finally begin.

During this first week, I had been scouring the internet for some way to help my horse get through this. I was advised to use many different products, most of which had toxic elements in them. My daughter found a site showing an injured horse and how that horse had healed with treatments of emu oil. I immediately ordered the oil from Back Country Naturals.

Through the remaining autumn and over the winter, I would go out early in the morning to spray emu oil on Ranger’s wound. Many mornings the rosy rays of sun would be shining through the steam coming out of the open wound. I would return at lunch and again in the evening to apply the oil. Ranger was such a gentleman through all his treatment. Occasionally, I would have to remove any hay or other debris that was stuck in the wound. If I hurt him, Ranger would gently nudge me with his head.

Though the months wore on, I continued applying emu oil 3 times per day. I tapered off to just 2 times per day around March. There were a few times when I ran out of oil and had to wait a day or two to get a new supply. During those times, the wound would become very dry, scabby and would crack open and bleed whenever Ranger moved around. I discovered how important it was to keep the area moist with the oil.

Though it took many months to completely heal, Ranger’s wound was completely closed in June of 2011. He has achieved full movement, is pain free, and can do everything he has always done. The scar is minimal given the extent of the injury and continues to improve with just occasional emu oil treatment. Notably, the hair has grown back black instead of the usual white air associated with scarring.

This was a lengthy and difficult healing process, but through it all I have established a wonderful bond with my horse. We have both discovered the miracle healing properties of emu oil!

Caution! Pictures are graphic in nature 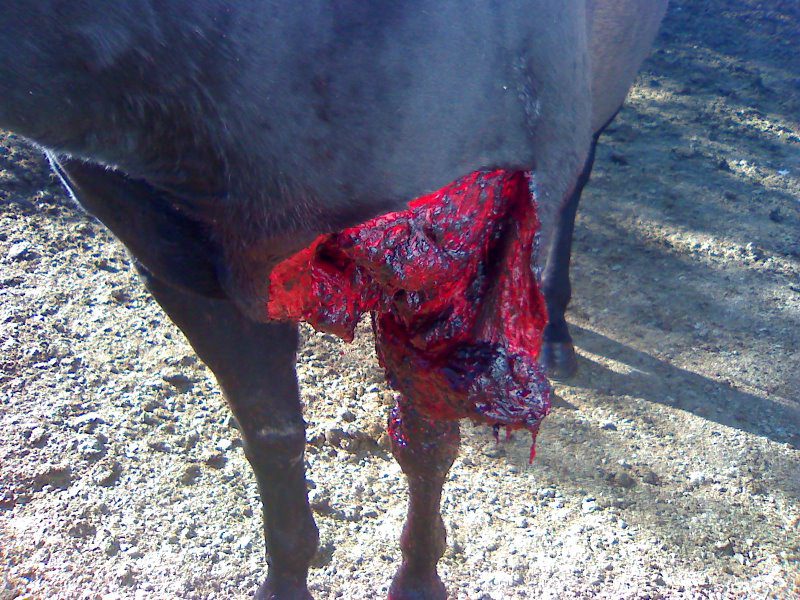 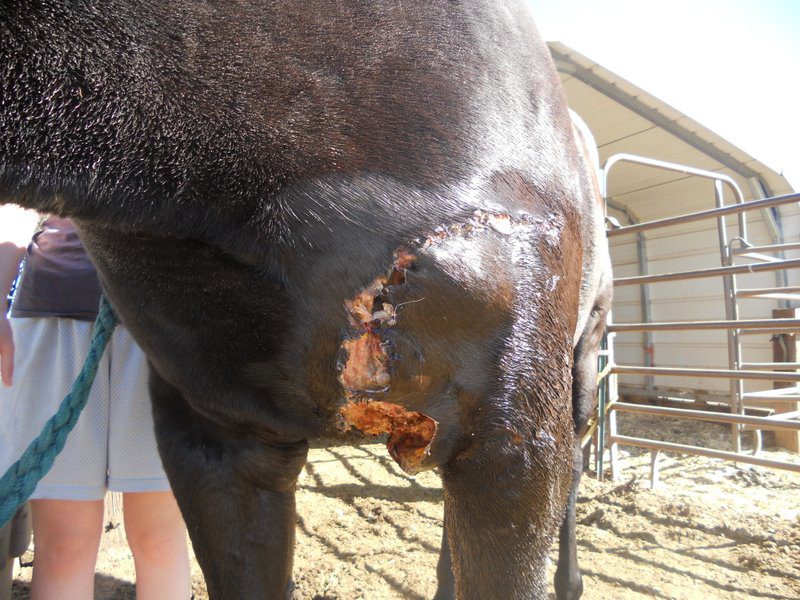 Veterinarian sutured the wound back together

Veterinarian sutured the wound back together, but the attempt to save the skin and muscle that was damaged is obviously failing. This occurred during the first 8 days after the injury. Just as a side note, if i had this to do over again, i would have had the damaged tissue removed immediately and started emu oil right away_ trying to save the skin and piece of detached muscle set healing time back at least 10 days and caused further suffering for my horse. 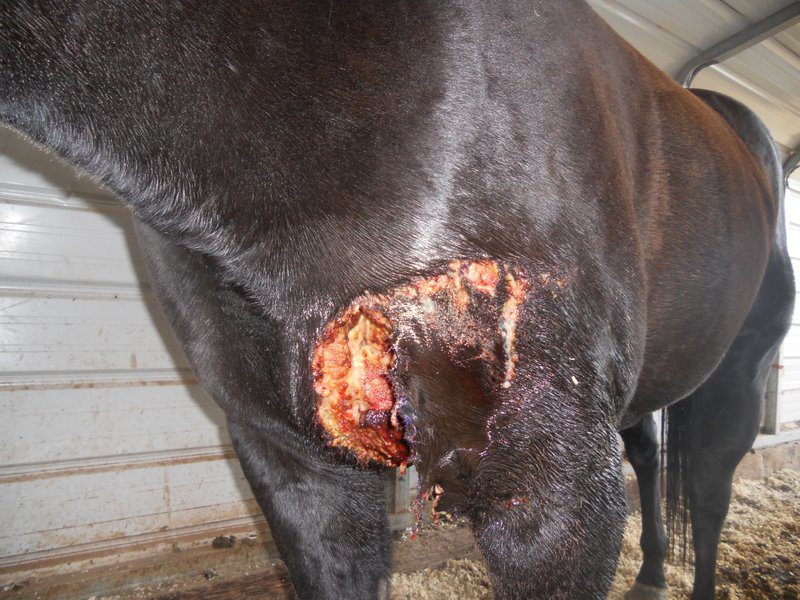 By this time! Was frantically scouring the internet for something to treat him with that wasn't toxic. My daughter found back country naturals. 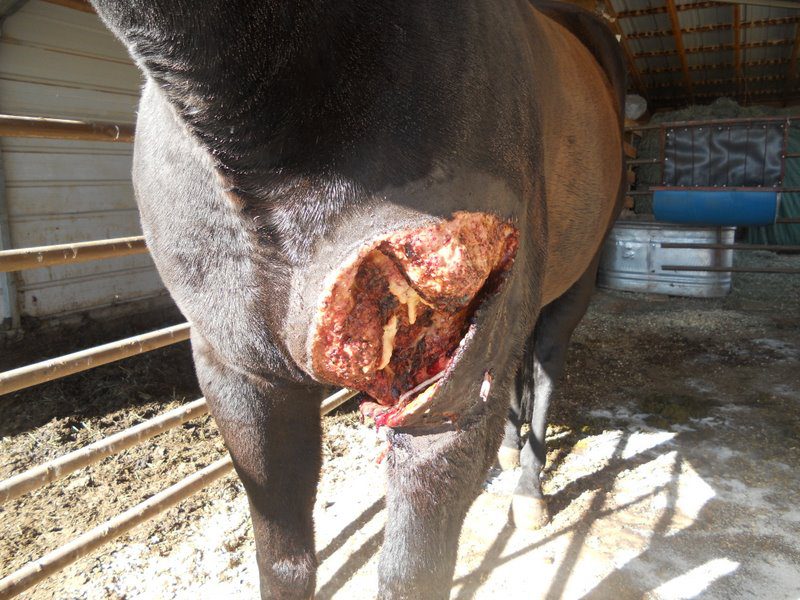 The vet returned and debrided all the necrotic tissue away. I began treatment with emu oil on week 2. 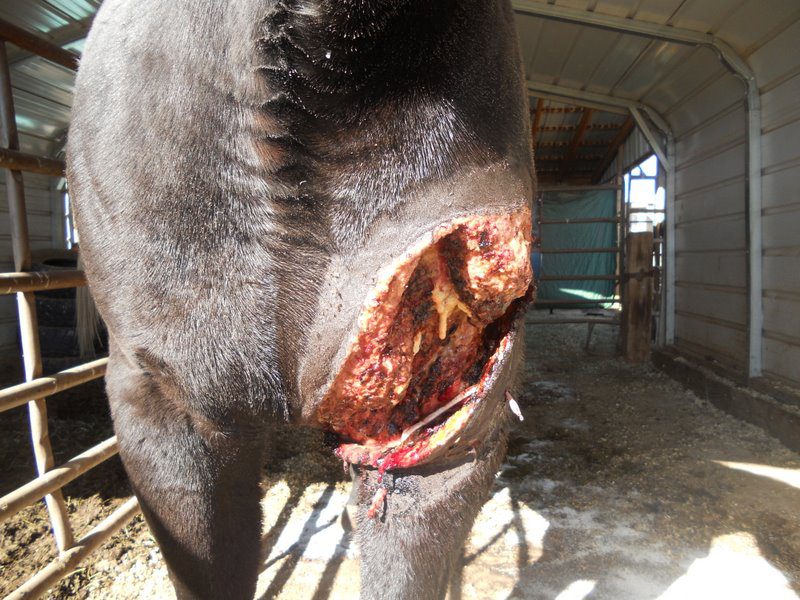 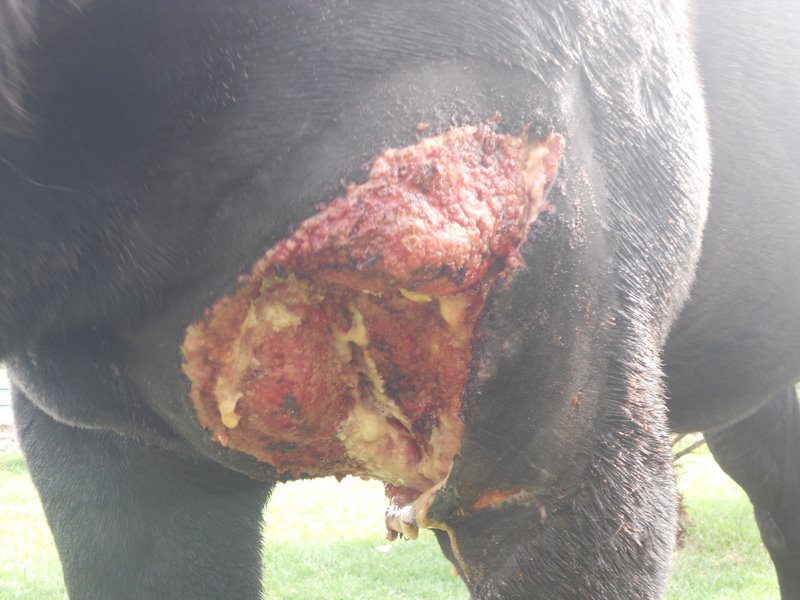 Notable granulating (healing) tissue. The yellowish, frothy material is an exudate that is normal with traumatic injury like this. The wound would suck air whenever ranger moved, and he had air trapped under the skin up in his neck to the mane and near the withers. It felt like he had bubble wrap under his skin. 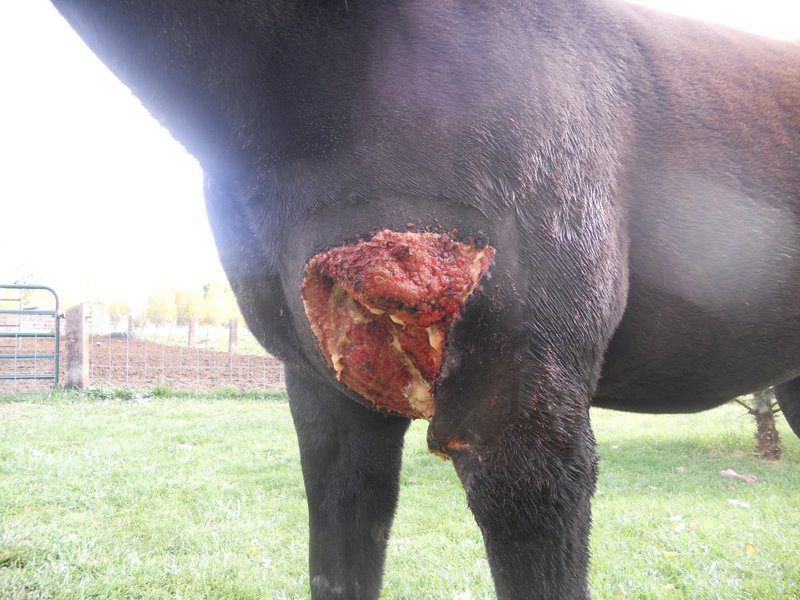 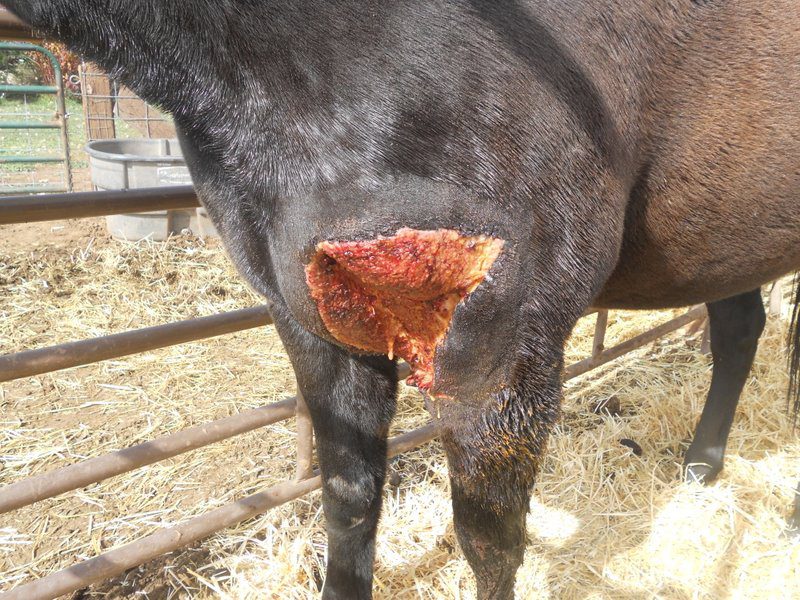 The wound is beginning to narrow

The wound is beginning to narrow and exudate decreasing Still applying emu al_ 3 x per day. It was still warm enough for a few flies to be a problem; however, they would not land on the open wound where the oil was. 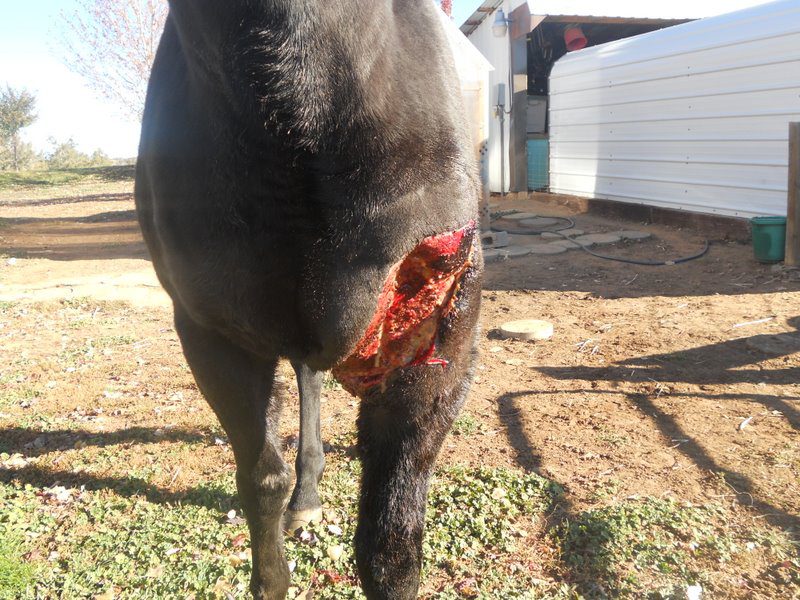 Temperatures were cold, especially at night and early in the morning. The wound would have steam coming out of it each day when i would go out to treat him. There is still significant swelling in the limb, but the wound is showing further narrowing. Using oil still 3 x per day. 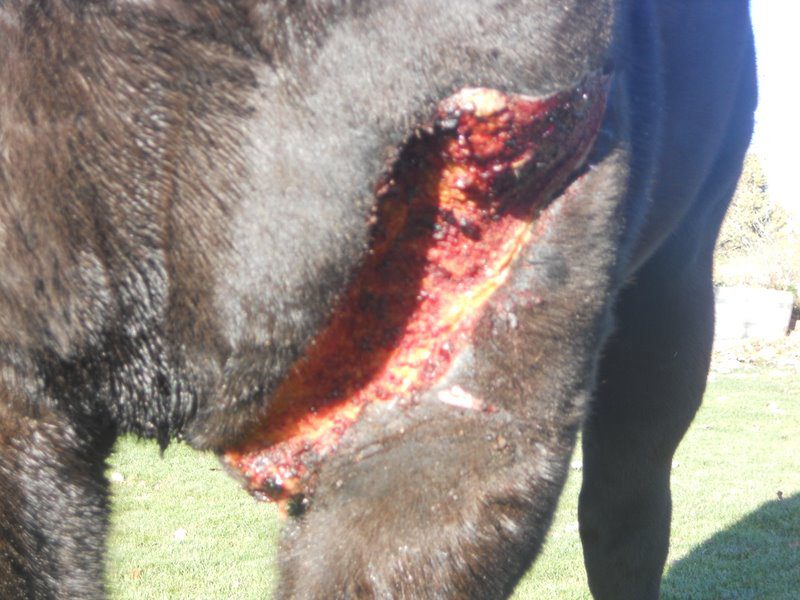 Improvement has been so great, we have decreased oil application to 2 x per day. 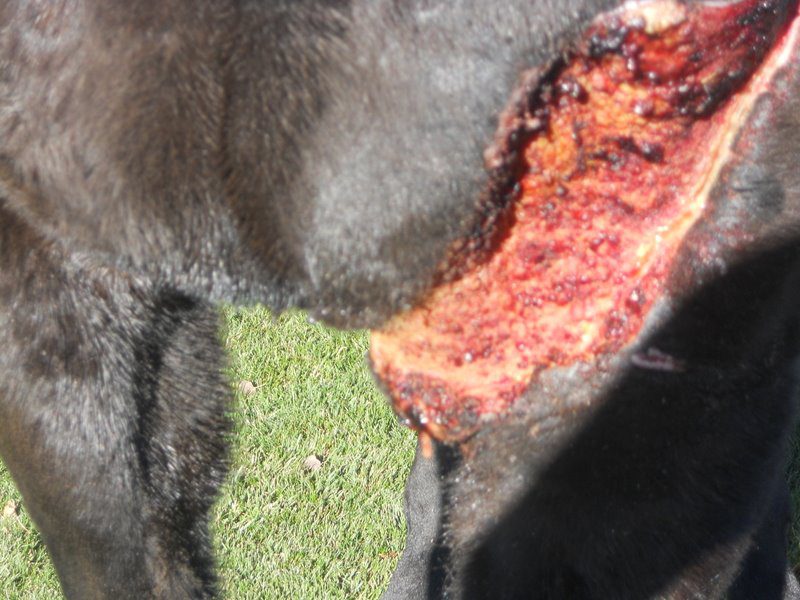 Much improvement! If we missed a treatment with the oil, the wound would scab over, become very stiff and dry, and would split open when ranger moved around. It was so important to keep he oil on the wound twice a day. 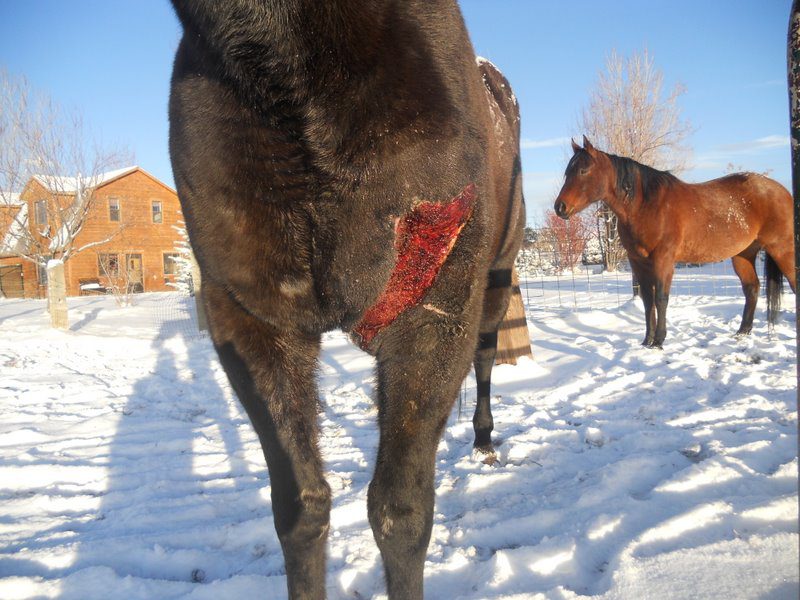 January brought snow and cold temperatures, but the swelling in the leg decreased and the wound continued to close. 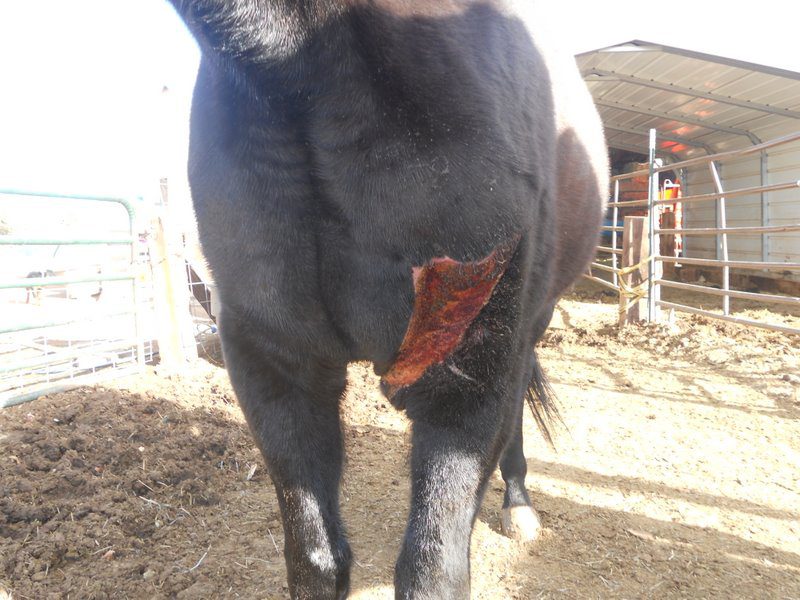 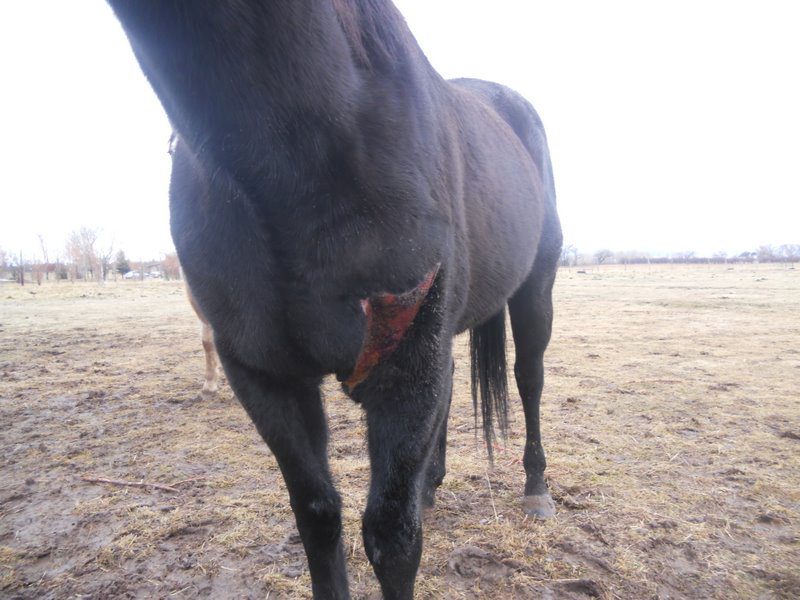 Late February - the tissue is showing far less of the bumpy granulation and is smoothing out and becoming pink. It was still imperative to keep that oil on 2 x per day to avoid scabbing and cracking. 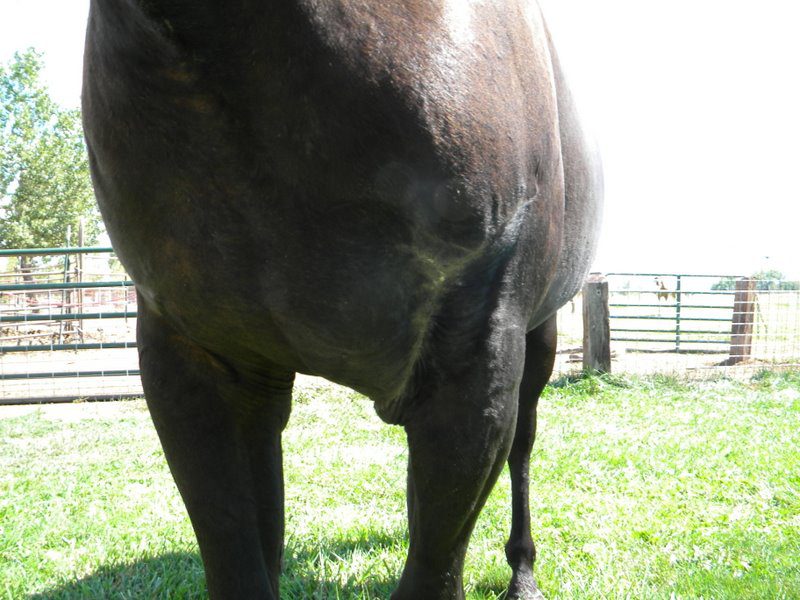 We continued to treat with emu oil twice a day for 5 more months. The last picture was taken september 5, 2011, nearly a year post injury. The wound is completely closed, the scarring is still improving, and the hair has grown back black. We treat with emu oil now when the scar appears dry or flaky. Ranger is pain-free and able to do everything he has always done. We ride often, and he has no lasting effects of this injury. 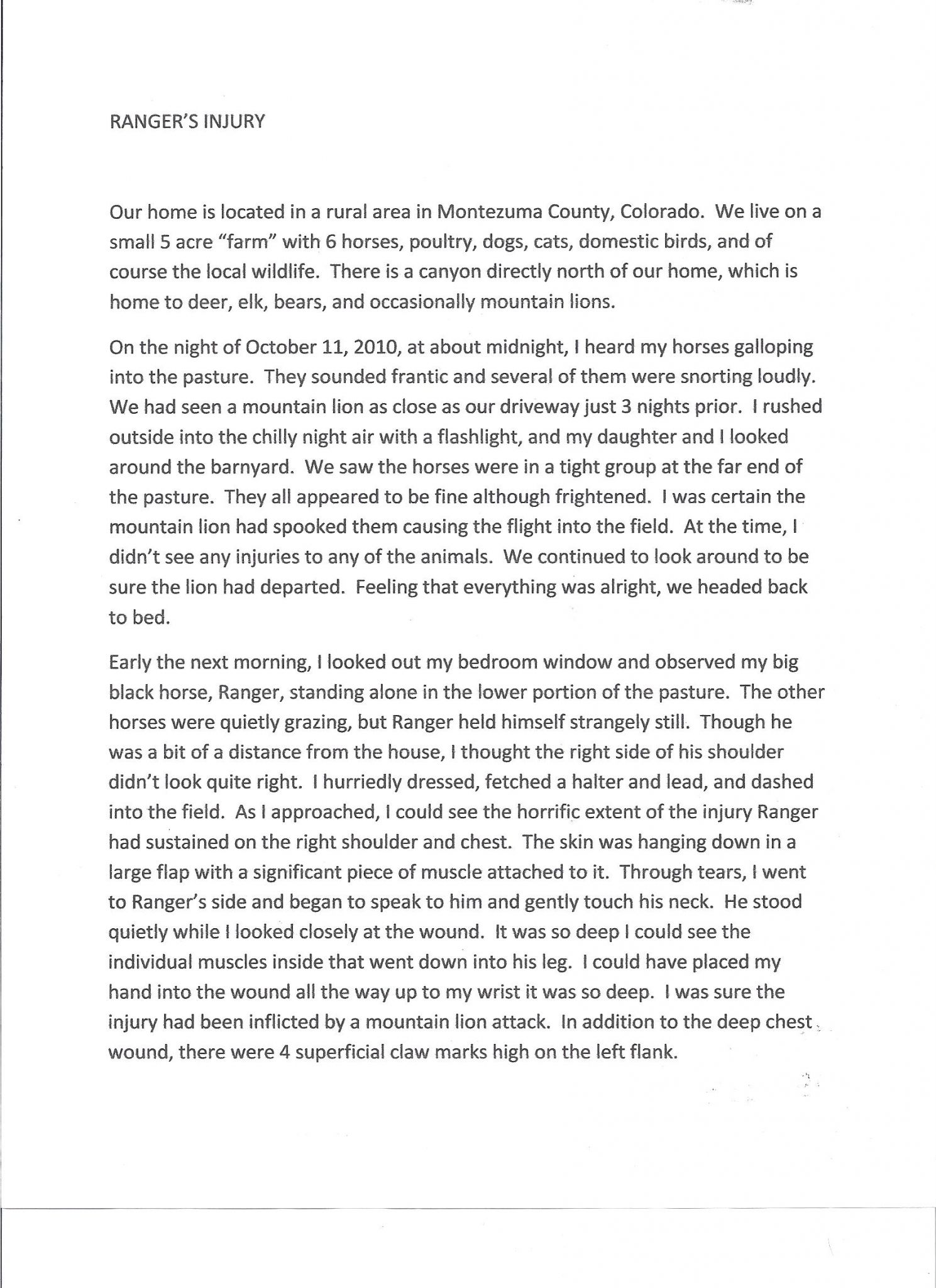 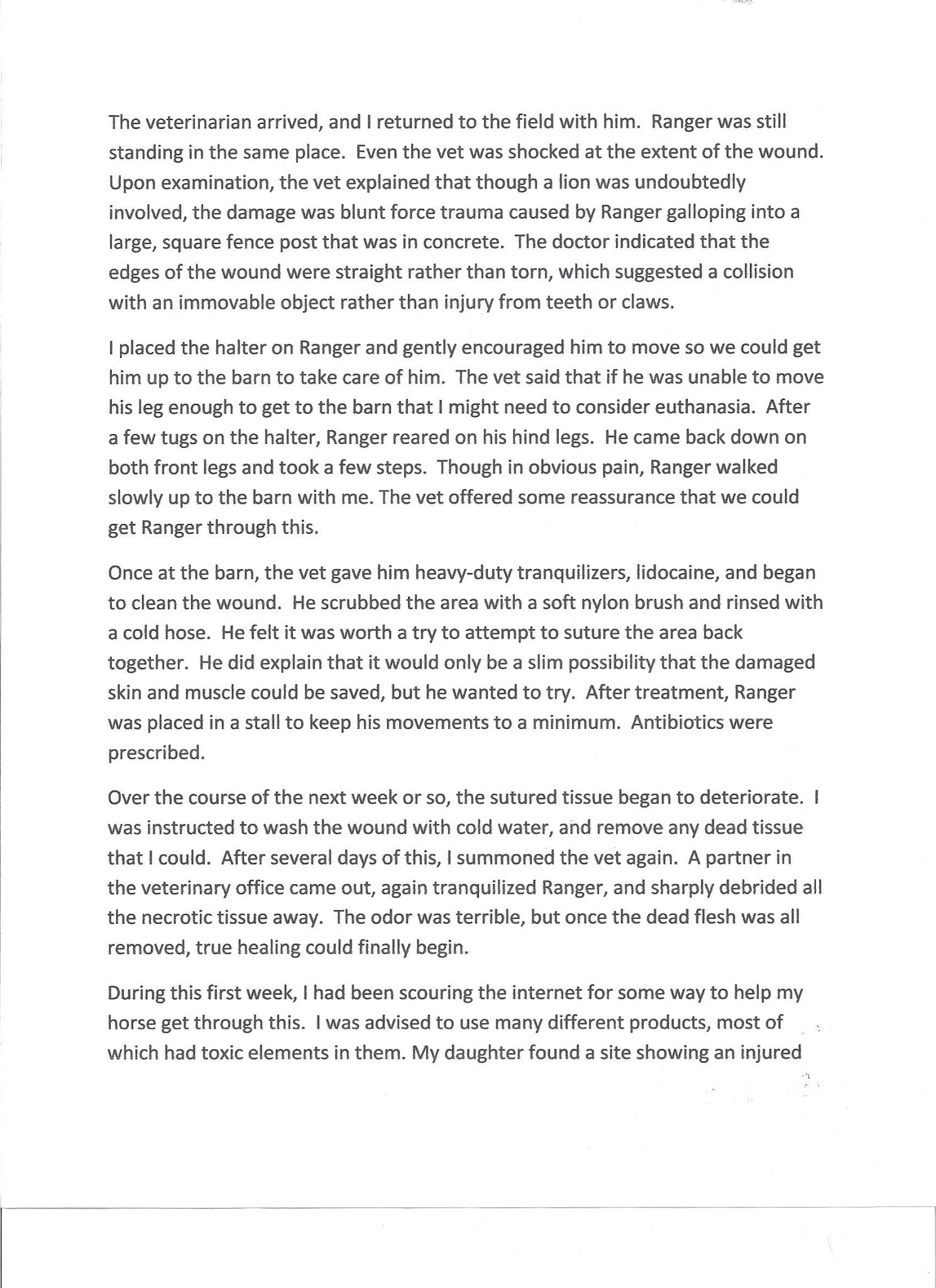 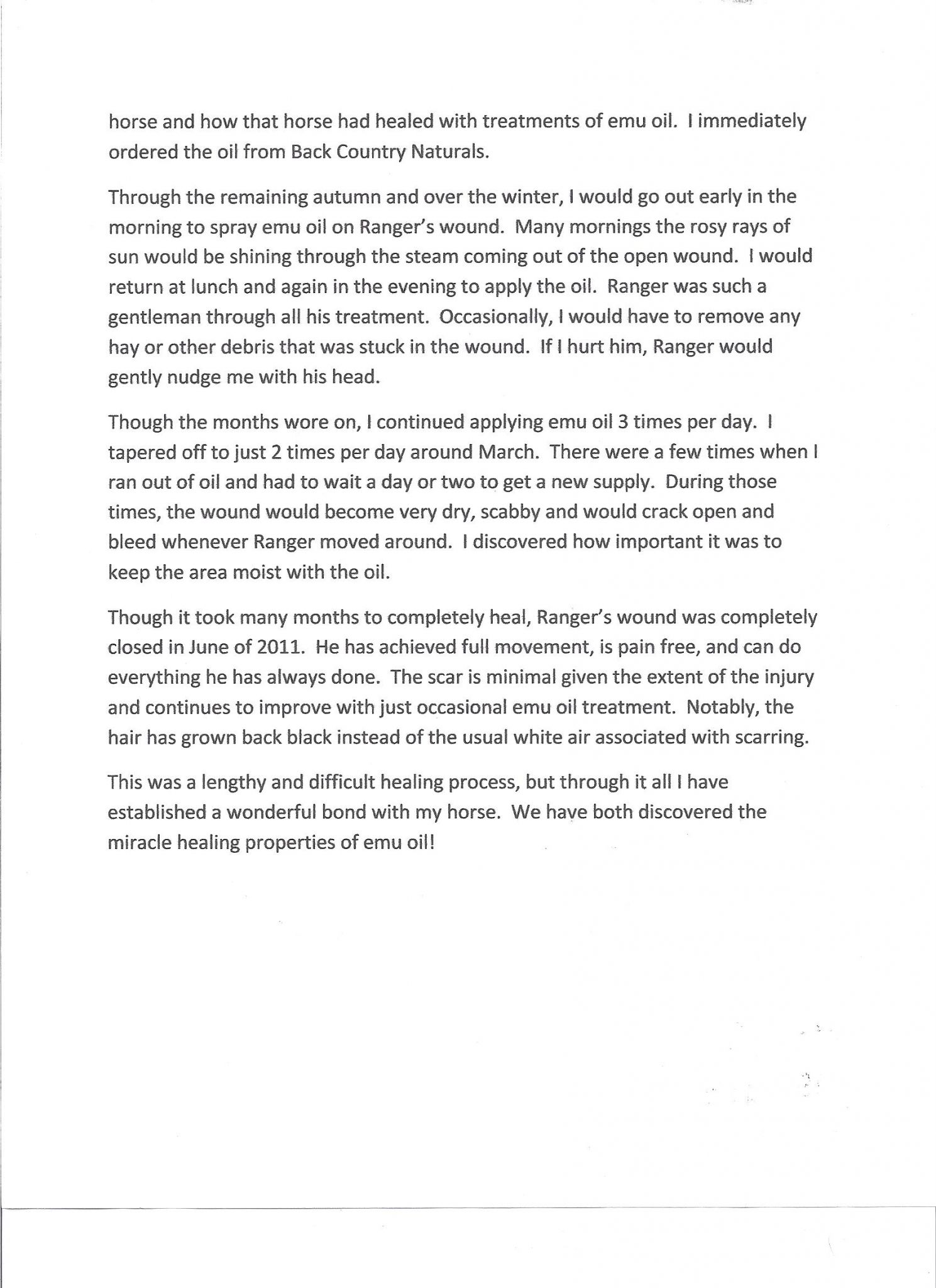